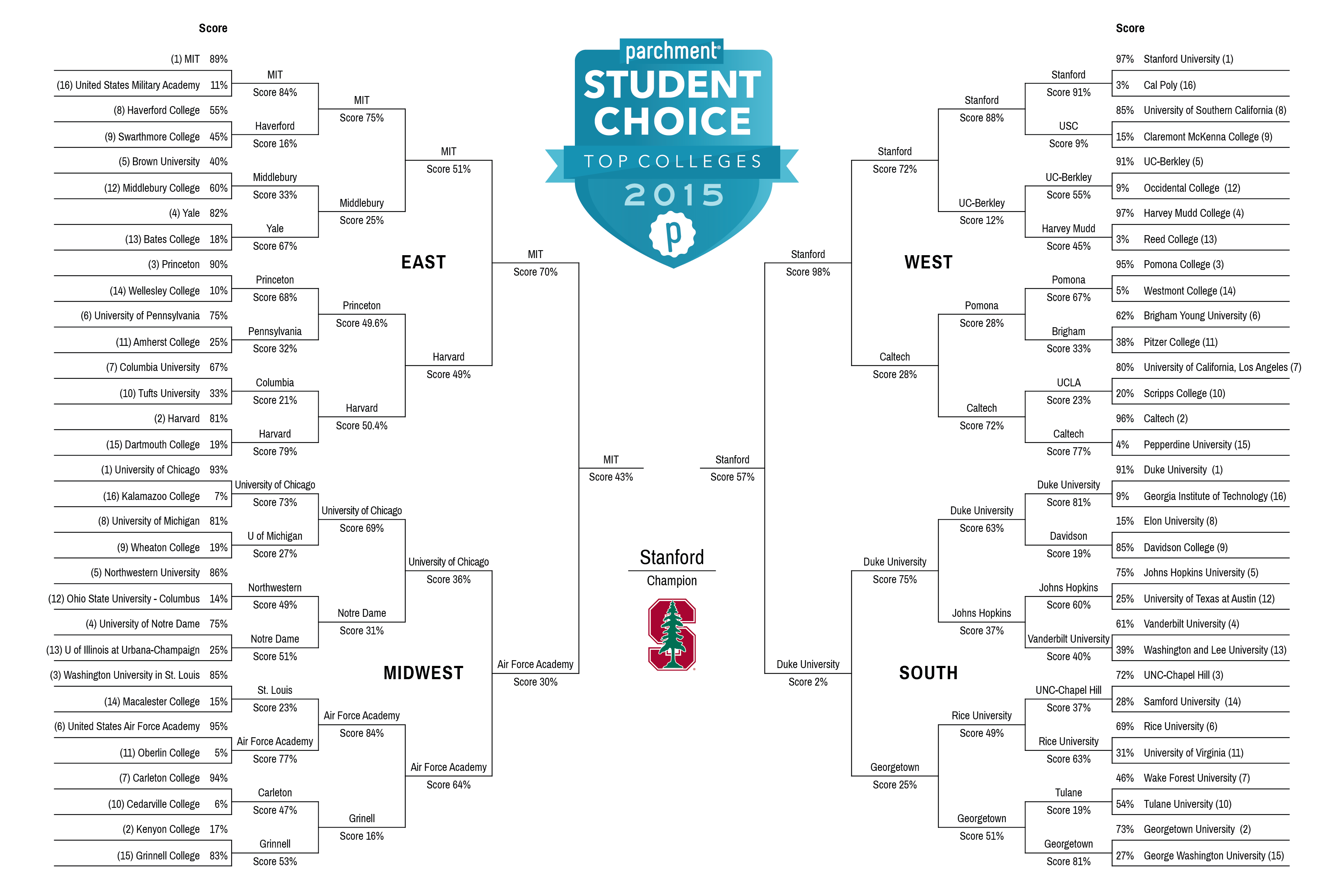 The 2015 Parchment Student Choice College rankings reveal that for the second year in a row, Stanford, MIT, and Harvard start as the top three colleges selected by students, respectively. Hold your applause because the real story lies in the fact  that military institutions have become a more popular choice, with the U.S. Air Force Academy shooting from 42 to 7, over top Ivy League schools Columbia (12), Brown (15), and Dartmouth (16). At the same time, the United States Military Academy moved up from 27 to 16 in just twelve months.

Through the 2015 Student Choice College rankings, we see the following movers and shakers:

There were some ups

How we do it

The only college ranking study 100% derived from student-reported decisions, Parchment’s study compares more than 700 colleges and universities from a sample size of 27,000+ U.S. in-bound college students. And that’s a lot of students!

Unlike colleges that generate rankings based on subjective judgments or factors subject to gaming, such as selectivity or test scores, we use a widely accepted tournament ranking methodology in which all colleges are created equal and earn points based on student acceptance and attendance. Actually, it’s a bit more complicated than that. (Think of an Elo-based points system used to rank professional chess players .)

Acceptance and enrollment data comes from Parchment.com. Students use Parchment’s  free online resource to collect all their education credentials, research colleges, discover their chances of admission, see how they stack up to peers, and send official transcripts to apply to their selected academic institutions.

Let’s see if this bracket matches up with the NCAA tournament in March!

This website uses cookies to improve your experience while you navigate through the website. Out of these, the cookies that are categorized as necessary are stored on your browser as they are essential for the working of basic functionalities of the website. We also use third-party cookies that help us analyze and understand how you use this website. These cookies will be stored in your browser only with your consent. You also have the option to opt-out of these cookies. But opting out of some of these cookies may affect your browsing experience.
Necessary Always Enabled
Necessary cookies are absolutely essential for the website to function properly. This category only includes cookies that ensures basic functionalities and security features of the website. These cookies do not store any personal information.
Non-necessary
Any cookies that may not be particularly necessary for the website to function and is used specifically to collect user personal data via analytics, ads, other embedded contents are termed as non-necessary cookies. It is mandatory to procure user consent prior to running these cookies on your website.
SAVE & ACCEPT